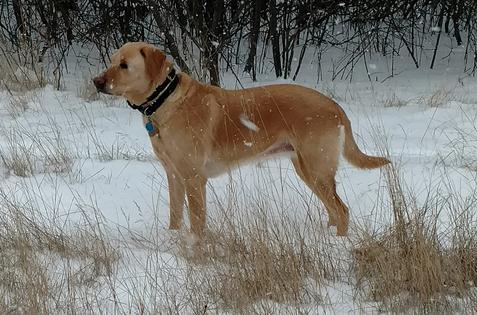 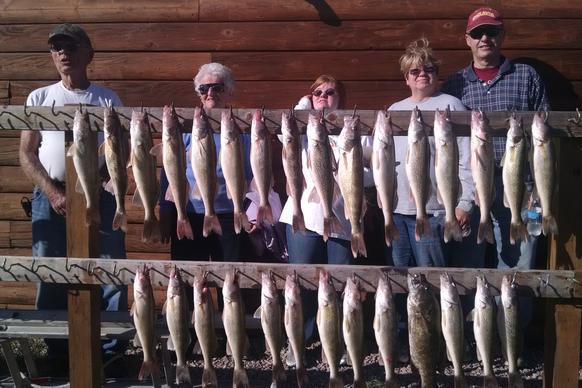 June 28, 2015:  Roland Wiek from MN, Darrell Deterding from NE, and Pat Fitzpatrick from MT limit of walleyes by 11am then and some big smallmouth. We've been getting our walleye limits early for the last 10 days on Lake Oahe.

June 3, 2015  The Cook group from NE and MN had good success in the Cheyenne river arm of Lake Oahe today. 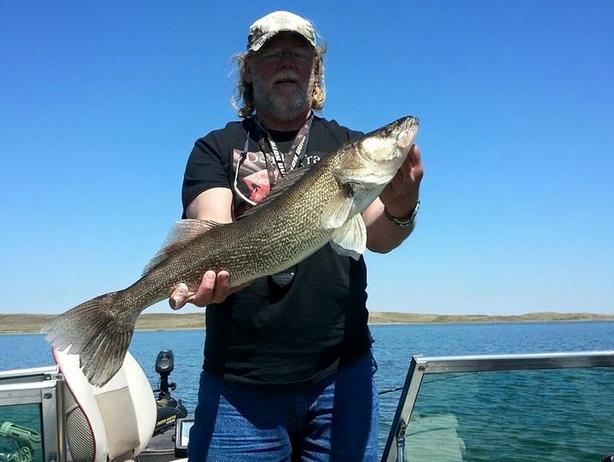 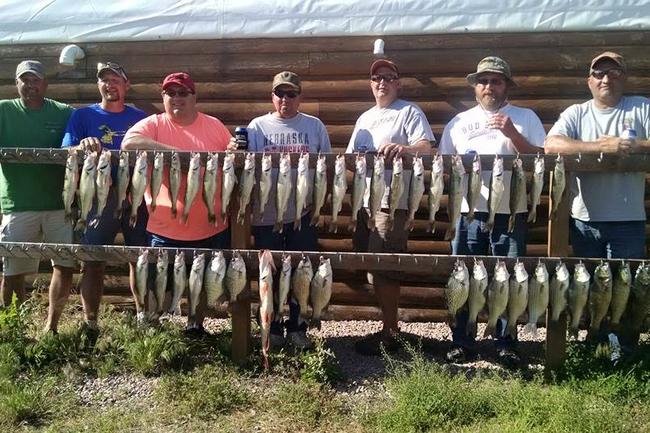 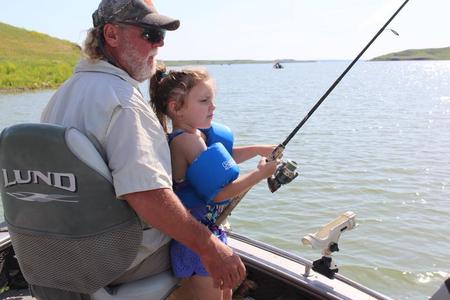 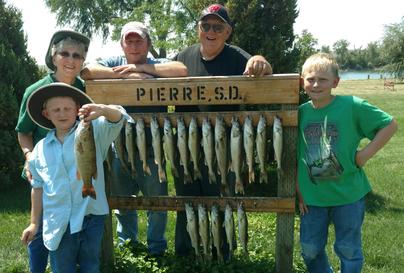 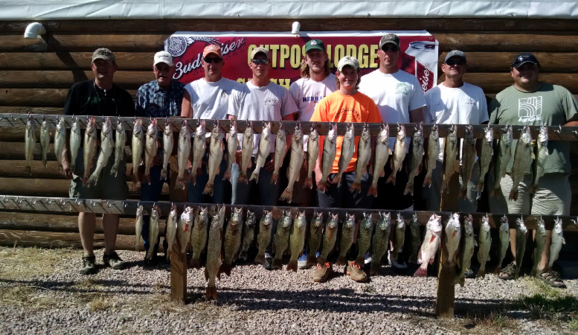 July 2, 2015:  Kaleb Chisholm from Nebraska with two of his nice walleye caught on Lake Oahe today. 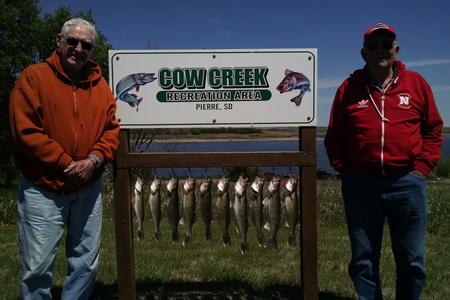 Call 308-383-2207 to reserve your dates to fish for walleye on Lake Oahe in South Dakota with Nebraska John. 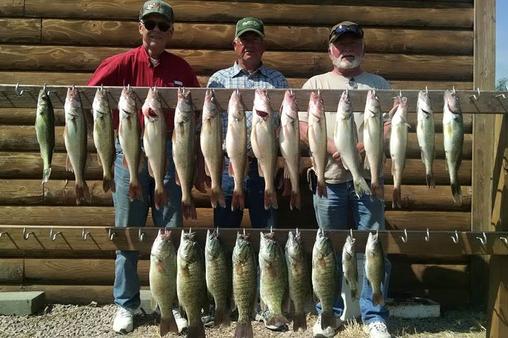 September 26, 2018:  Don Davis from Grand Island, NE. and I spent the day fishing on Lake Sharpe today.  Caught our limit of walleye and a nice bass. 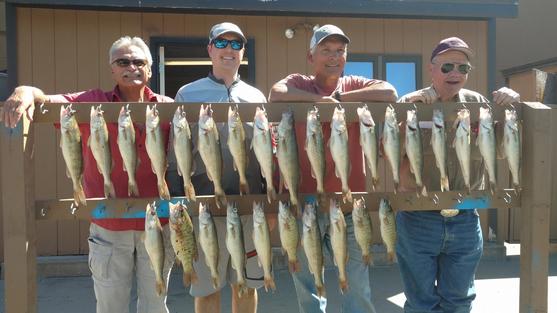 October 17, 2018:  Darrell Deterding with an 11lb - 4oz Pike caught today.  He and a friend of his ended up with 2 pike and 7 walleye.  We were a little short of our limit today but it was a really nice day for this time of year fishing on Lake Oahe. 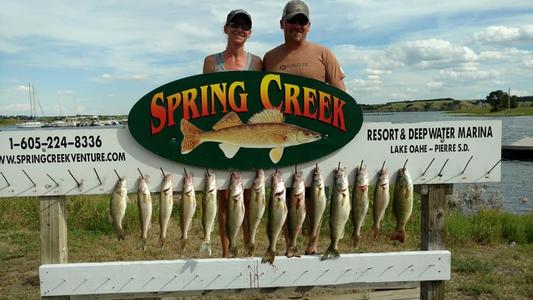 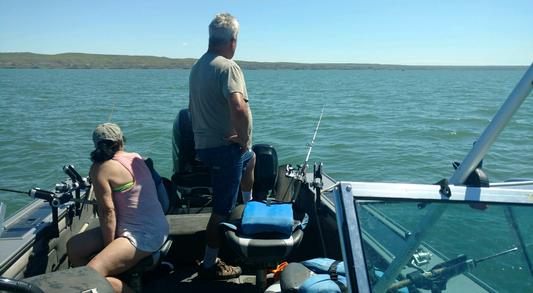 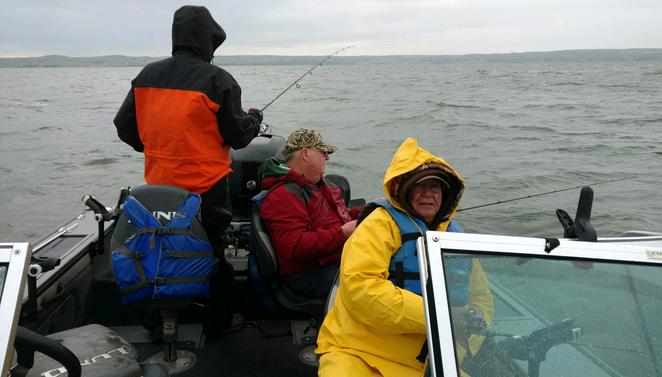 July 1, 2015:  A good day on Lake Oahe for Bob & Kaleb Chisholm from NE and Terry from Washington.  They caught their limit of walleye and some very nice smallmouth bass 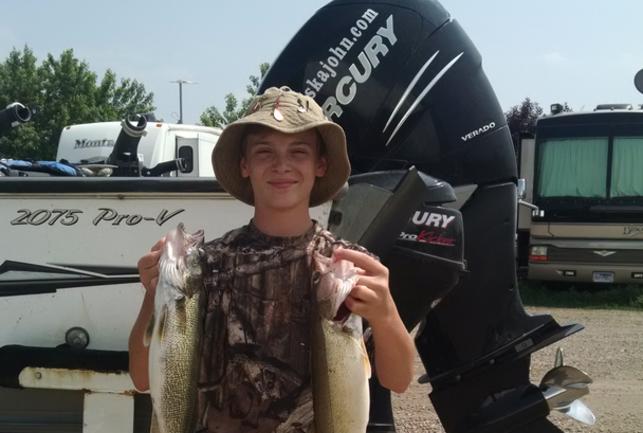 June 5, 2015:  These two couple from Grand Island, NE had a good day today on Lake Oahe, catching their limit of walleye. 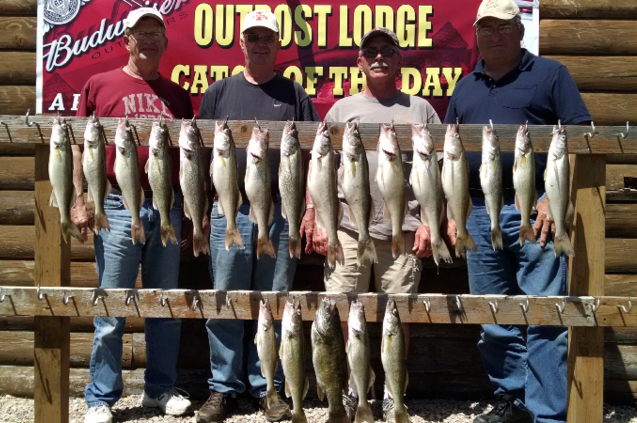 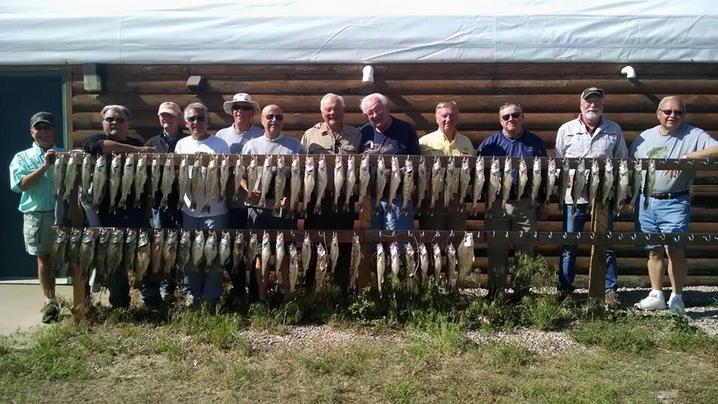 June 8, 2015: A group of classmates from Bloomfield, NE caught limits of walleye plus white bass, smallmouth, crappie and northern pike. 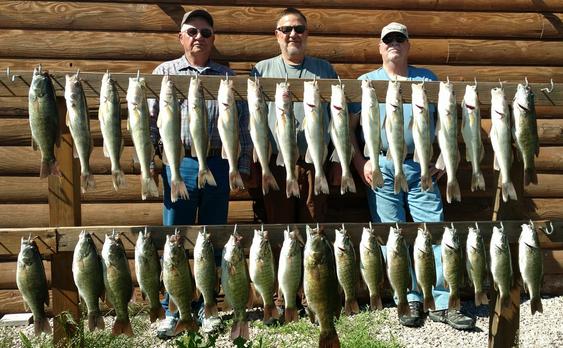 July 17, 2018:  I worked for Spring Creek Resort today and was very happy to meet Matt and Julie.  This was a case of slow going in the morning (above) but as you can see below, we kept checking everywhere and ended up with a pretty nice limit of walleye.   There were a couple smallmouth but somehow the catfish didn't end up in the picture.  I don't know how that happened.  (ha ha)  They had never been up here before so I really enjoyed hearing what they had to say about the lake.

August 10, 2015:   A lot of fun was had catching nice sized catfish;  the result someone miscounted the number of walleye in the livewell.  Blame that darn guide. 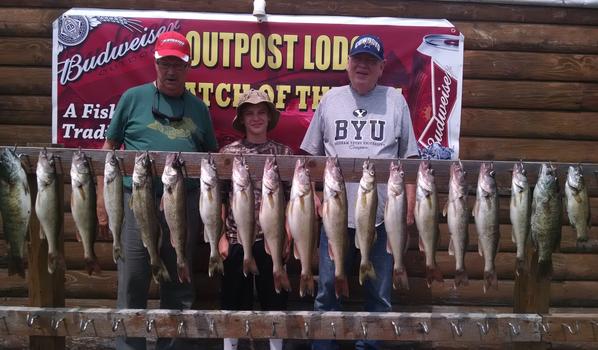 June 20, 2015:  These four guys from Templeton, IA caught a nice limit of walleye today.  A storm blew through last night with high winds and 2.5" of rain but didn't stop these guys from using their skills to catch the fish anyway. 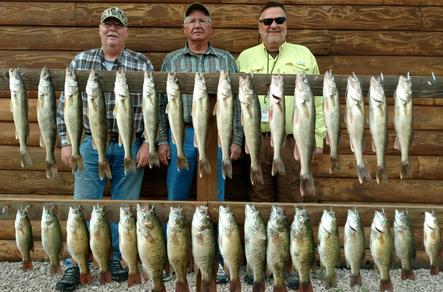 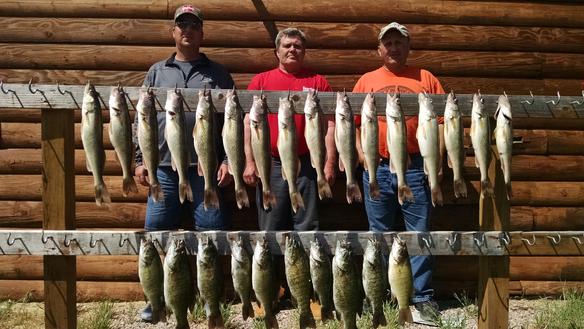 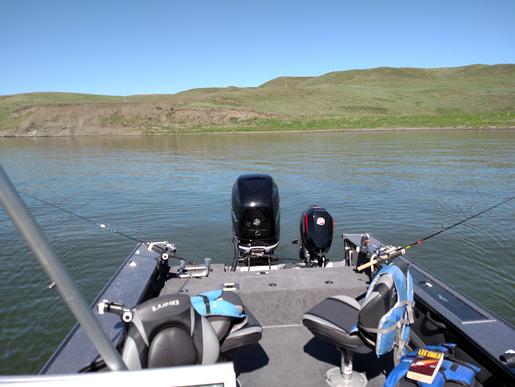 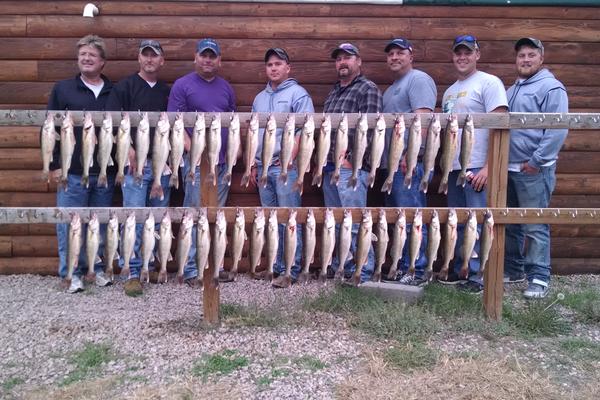 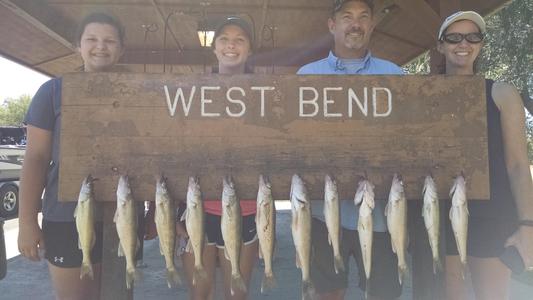 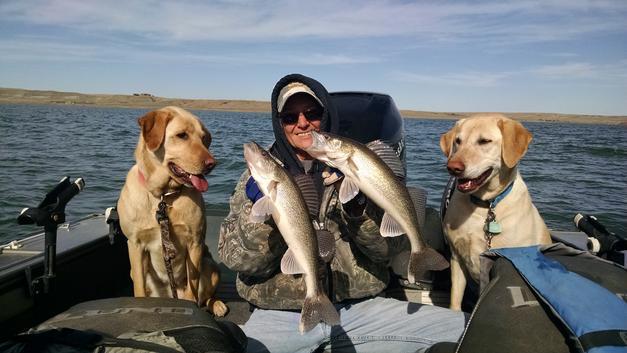 July 17, 2015:  Agrigold Seed, a group from NE with limits of walleye, some smallmouth and a pike. Lake Oahe is going good but it's getting harder to find them. 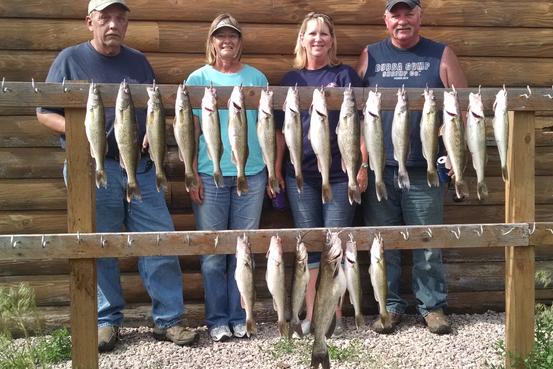 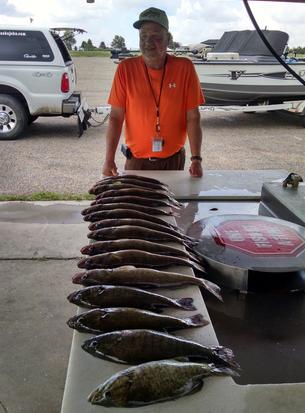 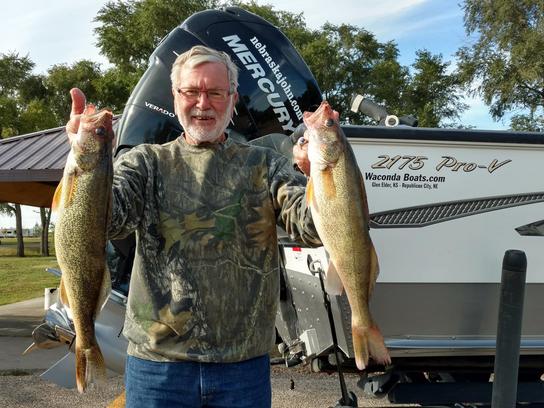 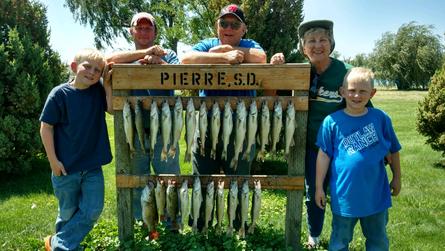 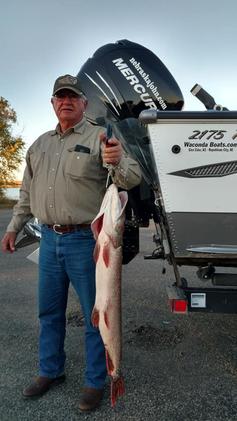 September 27, 2015  Amy from Missouri and her family came back this year and caught a nice limit of walleye.

​June 3, 2018: Worked for Dave Spaid today on Lake Oahe, I think we both had our limits by noon, then played catch and release for a couple of hours. Really fat and healthy fish. Also caught and released a 14 pound Northern Pike and a few smallmouth bass,

May 26, 2018:  A beautiful day on Lake Oahe.   My sidekick for the day forgot to take pictures of the fish.  Instead she went into the lodge at Spring Creek and came back with a couple 16 oz Ultras from the Chill Chamber!   I should have taken pics of them!